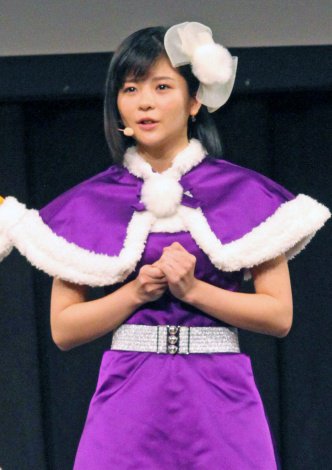 ANGERME’s Tamura Meimi has announced her graduation from the group.

To everyone who support us
I, Meimi Tamura, will graduate from ANGERME and Hello! Project during 2016 spring.
I have been a Hello! Project idol for 4 years and a half, since I became S/mileage. This year, I have been able to do this hall tour, and perform successfully 2 times as 9 members at the Nippon Budokan. Fukuda Kanon-san also gratuated and we have welcomed a new member so this year was really full.
With all of this, I want to follow my own challenge! This feeling became little by little stronger. And during ANGERME’s activities, many people told me they like when I sing, and every time I heard those words, I thought about always singing.Then, about one of my other dreams… I would like to be a musical actress. After this nice dream realized of becoming a S/mileage member, I would like to have a new start and fulfill this new dream.
I am anxious about some points, but I made this decision thanks to all the fans.
S/mileage grew up as ANGERME. As ANGERME’s member, I have been proud that I performed as a Hello! Project idol.
I will cherish the remaining time I have as an ANGERME’s member and I will continue to try my best harder than ever!
Please continue to support ANGERME, as well as Meimi Tamura!
20th December 2015 ANGERME Meimi Tamura

With the recent graduation of Fukuda Kanon, the group has seen a significant change in their focus and image, and it seems like we’re in for yet another change with Tamura Meimi’s graduation.

It’s a surprising move, and one that no one saw coming since she was among the members who usually seemed like a solid choice for many throughout the almost 5 years she has been with Hello! Project.

Still, graduations around this time of year are not rare so it was bound to happen. Regardless, seeing her grow up within Hello! Project was a treat and I give her all of my support as she moves on to even bigger projects.

Thanks Tamura Meimi for being with S/mileage and ANGERME!

Her graduation will take place in Spring of 2016.

3 thoughts on “Tamura Meimi To Graduate From ANGERME”